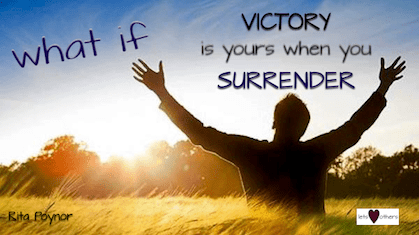 You learn the art of surrender in the place called solitude— separation from the world. Willingly posting the Please Disturb sign on your heart. Inviting Papa into every facet of your life.

As you draw nearer to Papa, your spiritual insight increases. His majesty, divine power and truth move from the realm of the theoretical to the concrete.

Submitting to Papa’s will is an act of spiritual maturity and intelligence.

Unfortunately, many fail to hear Papa’s voice because of their lifestyles. Believing the lie that solitude is something to be avoided, pitied or condemned.

They fill their environments with noise because the quiet makes them uneasy.

They settle for relationships devoid of affection and respect because it is preferable to being alone.

They treat illnesses with medication instead of rest.

Nothing satisfies the hunger in their souls. A hunger that is only satiated when they surrender to Papa’s plan for their lives.

It is time to raise the white flag and surrender to the One who promises freedom, not imprisonment. Freedom to…

Worship Him in spirit and truth.

Open the previously locked doors of the Kingdom.

Live a life of abundance.

Reign here on earth and in the heavens.

The Spirit of the Lord is on Me because He has anointed Me to preach good news to the poor. He has sent Me to proclaim freedom to the captives and recovery of sight to the blind. To set free the oppressed. To proclaim the year of the Lord’s favor.⁠