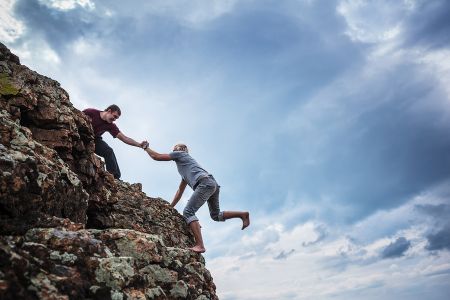 The inherent desire for justice is primal. Assuring us that the human race will not join the dinosaurs, the Barbary lion or the dodo bird.

Justice is the gatekeeper of the greater good. Preventing the proliferation of evil. Evil that…

Preys upon the innocent.

Proclaims the guilty innocent and the innocent guilty.

Like much that was once great about America. We have abandoned the greater good for the greater me.

The statistics are staggering.

1 billion children worldwide are living in poverty. An estimated 22,000 children die each day as a result.

805 million people worldwide do not have enough food to eat.

165 million children under the age of 5 have a reduced rate of growth and development due to chronic malnutrition.

Hunger is the number one cause of death in the world. Killing more than HIV/AIDS, malaria and tuberculosis combined.

It is estimated that $60 billion annually is needed to end extreme global poverty. That is less than 25% of the income of the top 100 richest billionaires.

More than 750 million people do not have access to clean drinking water. Inadequate drinking water, sanitation and hand hygiene contribute to diarrhea. Which kills an estimated 2,300 people per day.

Because they are too poor to afford proper treatment. 2 million children each year die of preventable diseases like diarrhea and pneumonia.

21.8 million children under 1 year of age worldwide have not received the three recommended doses of the diphtheria, tetanus and pertussis vaccine.

We can do better!

We can change lives by obeying God and His truth. Truth that is just and without prejudice.

Do not be deceived! God rights all wrongs. Dispenses mercy when needed, and discipline when deserved.

Israel in eighth century B.C. was an economic, political and military giant. Misjudging the reason for their prosperity and God’s attitude about disobedience and apostasy. Both the nation and her inhabitants were shamelessly disobedient.

Angered by their wickedness. The Lord used the prophet Amos to reprimand His disobedient children. Commanding them to repent. So they would once again let justice run down like waters and righteousness as a mighty and ever-flowing stream. Amos 5:24

No longer would the Lord be pacified by sacred assemblies or religious rituals. Unless the Hebrews shared their wealth with those less fortunate. They would be disciplined.

The Lord’s counsel fell upon deaf ears. Self-gratification had replaced giving food and clothing to the poor and the foreigners. Doing justice for the fatherless and the oppressed. So men of the earth may terrify them no more. Psalm 10:18

Sadly, the same can be said for many today who call themselves Christians. Refusing to acknowledge they are held to a higher moral standard than non-believers.

Yes, their sin has been forgiven. Their eternal passports stamped. Even so, there are always consequences for sin.

Sin that unashamedly declares. Evil is good, and good is evil. That dark is light, and light is dark. That bitter is sweet, and sweet is bitter. What sorrow for those who are wise in their own eyes and think themselves so clever. Isaiah 5:20-21

Sin mocks God’s holiness. It scorns His justice by thumbing its nose at abolishing corruption and immorality. Punishing those found guilty of peddling evil.

It is the Lord’s truth that brings moral order to the world. When His truth reigns.

The Lord scattered everywhere. He gave to the needy. His righteousness remains forever.
The One who supplies seed for planting and bread for eating. Will supply and multiply your seed and will increase your crop. Which is righteousness.

You will be made rich in every way so that you can be generous in every way. Such generosity produces thanksgiving to God through us. 2 Corinthians 9:9-11

Stop worrying about everyday life. Whether you have enough food and drink or enough clothes to wear. Isn’t life more than food and your body more than clothing?

Look at the birds. They don’t plant or harvest or store food in barns. For your heavenly Father feeds them. And aren’t you far more valuable to Him than they are?

Can all your worries add a single moment to your life?

And why worry about your clothing? Look at the lilies of the field, and how they grow. They don’t work or make their clothing. Yet, Solomon in all his glory was not dressed as beautifully as they are.

And if God cares so wonderfully for wildflowers. That are here today and thrown into the fire tomorrow. He will certainly care for you.

Why do you have so little faith? Don’t worry about these things. These things dominate the thoughts of unbelievers.

But your heavenly Father already knows all your needs. Seek the Kingdom of God above all else and live righteously, and He will give you everything you need. Matthew 6:25-33

God’s justice is eternal. It never veers to the right or left because its foundation is God’s truth— His principles for life. Truth that surpasses politically correct doctrines and the religious traditions of man.

List 3 things that hinder God’s justice reigning on the earth.

(Excerpt from I AM The Just Judge)

I AM The Just Judge e-book

I AM The Just Judge pdf