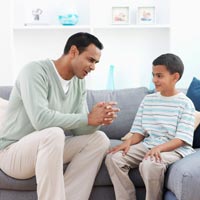 Last Monday I began a series about family. How a show from the 50s, Leave It To Beaver depicted positive attributes of a healthy and loving family that are as applicable today as they were then. In the Cleaver’s home

As parents we must continually remind ourselves that our children will one day become adults. Therefore, it is our responsibility as parents to instill positive values so that our children as adults make decisions that positively impact others.

Discipline is the process by which this is accomplished. Because each child is an individual the disciplinary strategies must be child specific. What is effective for one child in the family may not be for another child in the same family. Only through trial and error will this be discovered.

Example: told to stop running in the house but continues and breaks something.

Have a great day! Rita

Be the VOICE heard amidst the deafening sound of sameness!

2 thoughts on “Making a Difference Today”