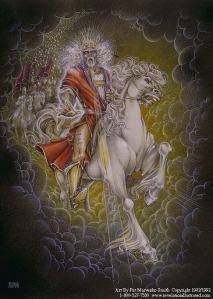 Yes, Jesus came to earth as a baby and suckled at Mary’s breast, but He grew into a courageous and powerful man whose heart was soft as silk but strong as steel.  This is the Jesus that the American church needs today. How do I know this? One needs to simply look at the statistics regarding men and the Church, and it’s crystal clear.

* The typical U.S. Congregation draws an adult crowd that’s 61% female, 39% male. This gender gap shows up in all age categories. On any given Sunday there are 13 million more adult women than men in America’s churches.

*This Sunday almost 25 percent of married, churchgoing women will worship without their husbands.

*The majority of church employees are women (except for ordained clergy, who are overwhelmingly male).

*Over 70 percent of the boys who are being raised in church will abandon it during their teens and twenties. Many of these boys will never return.

*More than 90 percent of American men believe in God, and five out of six call themselves Christians. But only one out of six attend church on a given Sunday. The average man accepts the reality of Jesus Christ, but fails to see any value in going to church.

*Churches overseas report gender gaps of up to 9 women for every adult man in attendance.

*Christian universities are becoming convents. The typical Christian college in the U.S. enrolls almost 2 women for every 1 man.

*Fewer than 10% of U.S. churches are able to establish or maintain a vibrant men’s ministry.

Christ is returning. But this time He won’t be a cooing, helpless baby.

“I looked up and saw that heaven had opened. Suddenly, a white horse appeared. Its rider is called Faithful and True, and with righteousness He exercises judgment and wages war. His eyes burn like a flaming fire, and on His head are many crowns. His name was written before the creation of the world, and no one knew it except He Himself. He is dressed in a robe dipped in blood, and the name He was known by is The Word of God. And the armies of heaven, outfitted in fine linen, white and pure, were following behind Him on white steeds. From His mouth darts a sharp sword with which to strike down the nations. He will rule over them with a scepter made of iron. He will trample the winepress of the fury of the wrath of God, the All Powerful. And there on His robe and on His thigh was written His name: King of kings and Lord of lords.”

The time has come for Christians to declare to the world, “I can be nice but don’t test me. Don’t mistake kindness for weakness.”